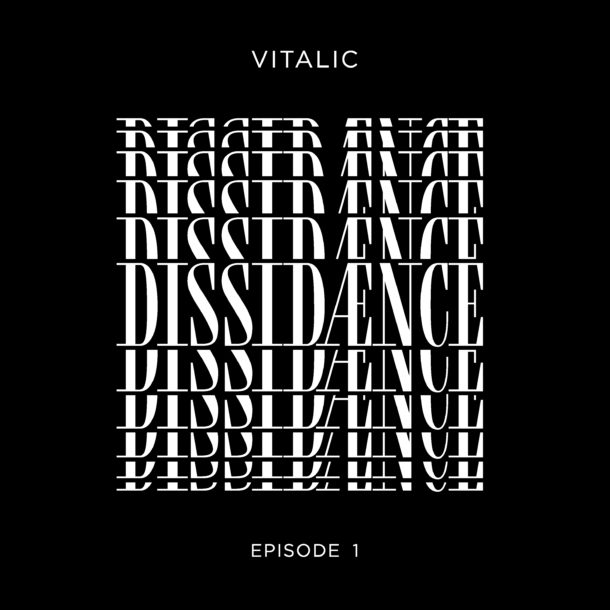 Locked down and furloughed, Vitalic went back to his synths and beatboxes, resulting in his fifth album “DISSIDÆNCE” – the title of which is a whole story in itself – destined to be released in two volumes. He describes it as a return to the roots of his sonic identity, a kind of reinterpretation of the rock energy of his early albums.

“More than anything, it was a question of timing. While composing I realised that eight tracks felt like too little for an album, and sixteen was really over the top, so I decided to cut the whole thing in half! The main reason though is that I felt I hadn’t been able to express everything I wanted to on the first volume – like something had been left unfinished.“

The first part of “DISSIDÆNCE” opens with “Haute Definition”, electro-mutant disco whose sounds unconsciously form a bond with the previous album “Voyager“, but the adventure quickly moves into harder, more techno-orientated territory, as confirmed by Vitalic. “I went back to a rougher style of composition than on my last two albums, a sound more influenced by the 1970s, more direct, less smooth. I wanted the production to be violent but still sexy.” “Rave Against The System” is the perfect example of this, and also the first single to be taken from the album, setting the tone with its martial rave-ready beat, overlapping acid loops and repetitive, angry vocals – “Rave against the system, we won’t stop, we can’t stop” – delivered by a fired up Kiddy Smile. It’s a furious, violent hit whose electro-punk feel indicates the direction the new album intends to take. Diving into this furious, sweaty swamp of unapologetic hard techno dredges up other pearls like “Boomer OK“, the humorous reply of twenty year-olds  to forty year-olds, sporting infrabass and wild vocals that transform the track into a mental and physical blender, “Carbonized“, with its crazy electronic gimmicks, score-settling lyrics, synthetic vocals and an energy that take us back (with great pleasure) to the incredible “My Friend Dario“, and “Cosmic Renegade“, like some kind of diabolical trance hymn that harkens irresistibly back the best of Jam & Spoon and German techno of the 90s.

Of course, as with all of his albums, Vitalic finds it amusing to play with our nerves (and bodies), alternating pure, visceral dance tracks destined for huge warehouses or festival stages with a whole swathe of sweet and soft ballads whose romantic tones take us delicately back to earth. We’re thinking of “Lost Time“, almost entirely ambient and beatless, like something from an imaginary film soundtrack, the sublime “Danse Avec Moi” which perfectly distils bouncy 80s electronic pop to tell the story of all the couples formed at 4am on a dancefloor, and “14 AM” which kicks off as a homage to Laurie Anderson’s “O Superman” before shapeshifting into earworm electronica doused in EBM.

While Vitalic says the second volume of “DISSIDÆNCE” will be more hardcore, the first is a sort of concentrated resume of his strengths from the past twenty years, whether it’s filthy, head-spinning tornado tracks or synth-laden love songs for a summer’s day.

With “DISSIDÆNCE“, whose powerful beats and galloping sequencers translate the social and political anger of the global pandemic, Vitalic looks into his past and channels his love for off-kilter synth sounds, skew-whiff pads, heady refrains, distorted vocals and heavy beats dripping with sex and sweat, but above all his obsessional passion for dance music. “DISSIDÆNCE” should be taken as a celebration of celebration, time-travel to an era that may not exist right now, but which will – and this album is the dazzling proof – be reborn from its ashes to burn bright once more, in all its raging glory.

1 an ago in News
LATEST VIDEOS
Cart
Latest Releases